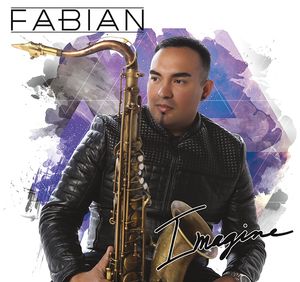 Imagine is here!!! Please check out the 2 teasers on my site! ...I also will be sharing a series of videos from the making of the album from time to time. The record will be available on May 1st, however you can pre-order the digital version of it ONLY on my website as of today! When May 1st hits you will get an e-mail with the download link for "IMAGINE". It's been a hectic year so far but there's lots to come of it...We have 2 CD RELEASE PARTY shows coming up April 22 in Austin, TX & Ganado, TX on the 23rd...Check out my calendar for the details...I'm stoked...Shirts came in today and they look dope! Stay in touch and join my guest list to still get a free copy of "A LITTLE SAX ON THE SIDE". MORE NEWS AND DETAILS COMING SOON!!! 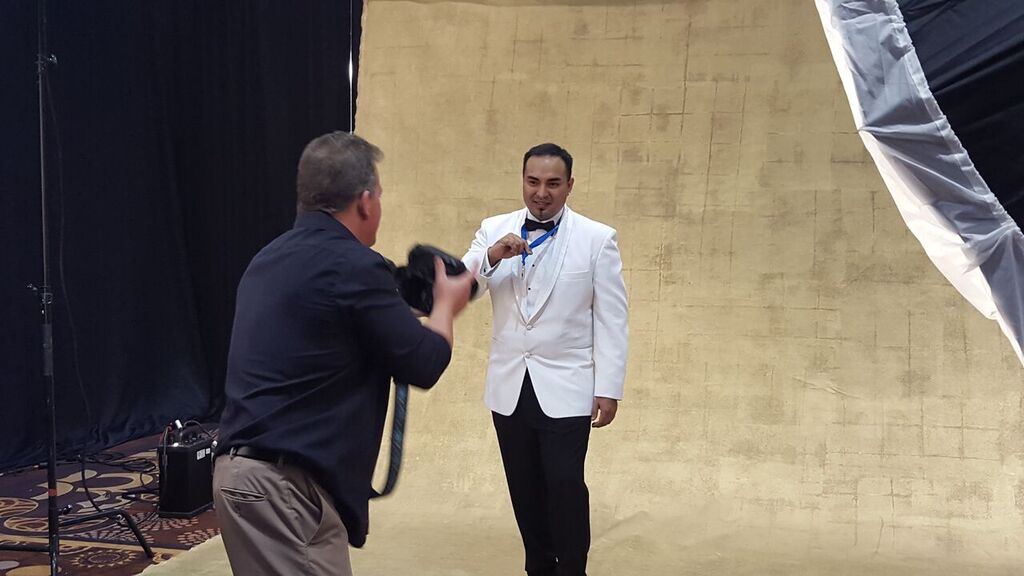 November was a super busy month...I had the Latin Grammys, My amazing trip to Waterloo, Iowa to visit the highly acclaimed Tenor Madness "Everything Saxophone & Heavenly Place" and we're getting super close to the release of my new album "IMAGINE"!

The Grammys in Vegas were amazing as usual!!!...So we didn't bring home the bacon, but hey... GETTING NOMINATED IS STILL SUPER AWESOME!..That brings my nomination count to 8 with 2 Grammy Awards...Not too bad for a country boy who watches too much Godzilla & Dragon Ball Z. The awards were magical and great as always. Did I mention that they had plenty of cold and free?!!! The dinners were top notch (They had full sized edible chocolate microphones for dessert). I even ran into "Saxophonist Great" Dr. Ed Calle at one of the after parties and bugged him relentlessly for like 10 selfies...haha!  It was great to catch up with the fellas from the studio production and since the Grammys were held in Vegas...I think we all know the phrase by now...Let's just keep everything in Vegas...lol....Thank You Ruben Ramos, Rick Fuentes, and The Mexican Revolution for allowing me to be a part of "The Revolution's History".
It means so much to me...more than you know...THANK YOU!  CLICK HERE TO SEE PICTURES OF MY GRAMMY ADVENTURE!

In December Tenor Madness Inc. will be doing a feature on their endorsers and new TM Custom sax in DECEMBER'S ISSUE OF DOWNBEAT.  WOW There's gonna be a Mexican in DOWNBEAT! LOL Visit your local newsstand to check it out! I'm honored and stoked to be a part of this issue.

Ok ...Recording is finished...Sounds Fucking AWESOME...!!! We're trying to finalize the graphics at the moment! Promotion starts mid December...Looking forward to sharing this with you all!!! Can't wait!

Waterloo, Iowa has corn, corn, and more corn, but it also has one of the most premier saxophone shops that has ever existed on planet Earth. My story with the highly acclaimed TENOR MADNESS doesn't involve a bunch of kids chasing me with machetes in a corn field(Children of the Corn montage). However, it is about an AMAZING TEAM of individuals that work together to make a DAMN GREAT PRODUCT! OK soooo...I was flown into the worlds smallest airport in Waterloo....Wait... lets do a rewind! I was flown into the world's smallest airport in all of IOWA...I had zero idea what to expect to be honest... I was pretty darn nervous...The goal of this trip was to meet up with the Tenor Madness Team and have "THE TEAM" help me find my DREAM TENOR SAX SET UP. The Tenor Madness Team consists of Randy & Shirley Jones, their finely tuned squad of saxophone geniuses and PIPA the Wonder Dog. Randy is one of the most elite saxophone designers of this generation. He's worked with all of the greats, fixed their horns and much more. Above all he's great people. It's not everyday you have one of the best ever take time out of his busy schedule and help you manifest the sound you've been hearing in your head all these years... I met Randy & Shirley at a show I played out in Iowa a few years back and we have been friends ever since. Every time I play in Iowa, Randy & Shirley always show their support by coming out...Thank you guys! OK back to my story! I arrived at the Tenor Madness headquarters with my anxiety level at 9,000!!! As soon as I arrived, Randy stuck me in a room with a recording set up, unlimited saxophones, a zillion variables and saxophone accessories! You see Randy started making his own saxophones years back and over the years he's devoted his life to making a quality instrument..."THE TM CUSTOM"  They are truly in my opinion the best modern tenor saxophones on the market. They resonate with character, have a huge sound, have spot on intonation and of course are set up by Randy. People all over the world pay Randy top $ for his set ups because they are the best. I've never experienced anything like it. Once I picked a horn shell I liked we moved on to choosing a neck...He listened to my taste in sound and immediately showered me with a mountain of necks, ranging from different alloys to finish to style, brand, etc, etc. I'll be posting my neck experience in another blog. Let's just say that it's one of the most significant things you can change to alter your horn's air flow. It can alter your dynamics, technique, tuning, flexibility....Man I had no idea! It's some seriously deep stuff! So after 3 days of testing and the worlds biggest headache, we found my dream sound. Also Randy included me into his roster of super talented TM Endorsers...I'm super excited to show off the sound of my new TM Custom. Ever since I brought it home I have been locked up in my room like the creature that lives in the attic just practicing. Thanks again Randy/Shirley & The Tenor Madness Team. You guys know what's up! YOU CAN SEE MY NEW SET UP BY CLICKING HERE! 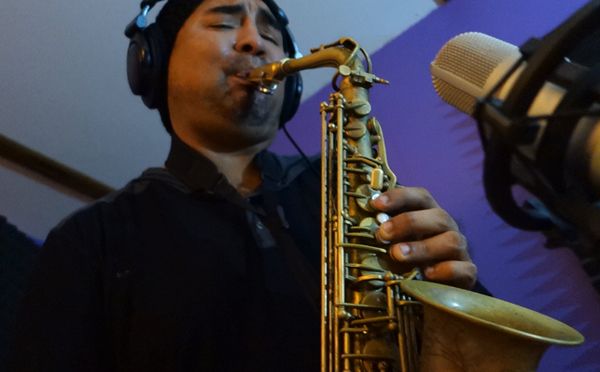 It's pretty thrilling when you can begin to see the end of something that also reflects a new beginning. Playing music has always been an extension of my inner self. Enabling me to always express my inner thoughts whether it may be sadness, anger, peace or plain madness. It gives people the opportunity to connect with me thru sound, spirituality, and several other unknown human traits that we have yet to discover the origins of. The new album is a series of emotions expressed thru song. Stage 1 is Imagine. If you have a dream or are following a course of "YOUR DESTINY" it may start with your imagination. These songs all represent a favorite pastime, something I experienced in life/tour, or an emotion that I feel regarding my current state in my waking life. This is my way of connecting with you and sharing a bit of myself. I had a blast putting it together. I'm in the middle of mixing it and it's sounding great. The team I assembled to bring my imagination to life consisted of my favorite people, musicians, and industry leaders. Without you none of this is possible. It takes a great TEAM to do anything in life...so a extra special thank you for your time and efforts!

"Imagine" is scheduled for release in JULY 2015 so keep your eyes peeled and please join my mailing list on the top of my home page to stay updated. Just click on the "HOME" button on top of the page and it will redirect you to my home page.(for the non savy) ...On the right side of the home page there is a section to add your email to join my mailing list. You will only get email from me! NO JUNK OR SPAM... SCOUTS HONOR! As a part of my mailing list I'll keep you informed on local shows, new music, or just my latest news. Also visit my PHOTOS PAGE OR JUST CLICK HERE to see some new pics from the "IMAGINE STUDIO SESSIONS".  I just added them so please enjoy! Keep in touch and hope to see you at the show! 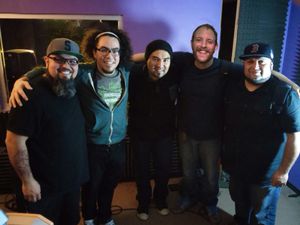 We've been in the studio night and day working on my next solo studio record named "IMAGINE"...I'm incredibly excited to show you the finished product...Here's a pic of the studio team (pictured from right to left)  Sinhue Aussenac-keys, Jorge Palomo-bass, Myself, Carter Arrington-guitar, Armando Aussenac-drums,(not pictured) Hamilton Loomis -guitar & Mikel Urdy-percussion.Thank You for all of your contributions!!! I'm exteremly proud of the new material and cant wait to release it. I'm currently in mixing stages...I'll be posting my progress...Stay tuned! Fabian